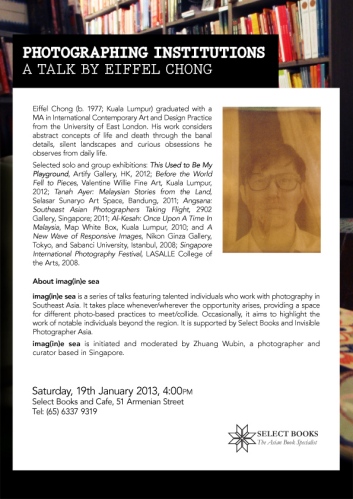 On 19 Jan 2013, Malaysian photographer Eiffel Chong made his maiden presentation in Singapore with Photographing Institutions: A Talk by Eiffel Chong. His presentation kicks off a series of talks organized by me under the imag(in)e sea series. More information about the series below.

In this talk, Chong contextualizes his fascination with manmade institutions through three bodies of work: Institutionalized Care (2005-06); Theatre of Cruelty (2010-     ); and Royal Malaysia Police (2012-13). 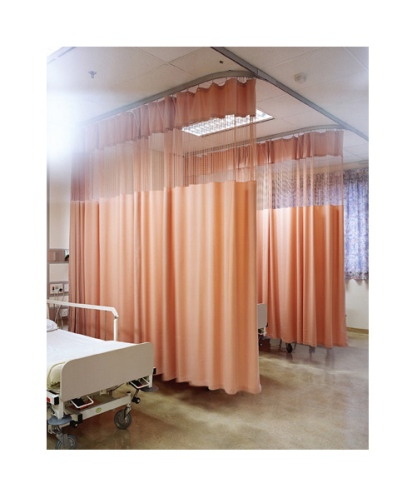 Institutionalized Care visualizes the sense of loss that Chong associates with the medical institutions, which stems from the passing of his grandmother. 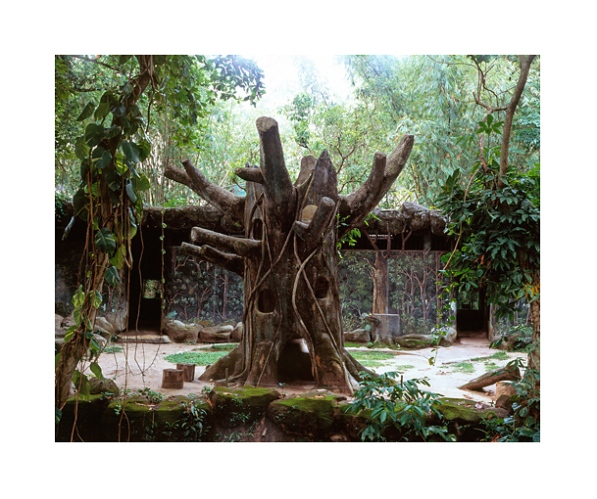 Theatre of Cruelty examines the institution of zoos and how they are presented as spectacles for human consumption.

In Royal Malaysia Police, Chong associates the natural decay of police portraits that he found in an abandoned police station with the attacks of integrity that the police (as an institution) has suffered in recent years within Malaysia.

During the talk and in the ensuing discussion, Chong is engaging and candid. Responding to the Facebook criticism of Royal Malaysia Police, Chong talks about his fear that people will read the work in different ways, which compels him to be even more deliberate and literal in his artist statement.

“My grandmother passed away in 2005, the year I started photographing hospitals. Her passing changed my way of taking photographs forever. Going to the hospitals after her passing was difficult for me simply because she spent her last moments in an A&E department and I was one of the few family members who was with her at that time.

“Since 2009, I started going to the zoos in Malaysia. Visiting the zoos brought happiness to me when I was young. I am sure it still brings joy to the children who visit them now. I want to experience the same happiness and this time round, I brought my camera along.

“In 2011, I came across an abandoned police station in KL. Surprisingly, I found passport photographs of police personnel scattered in the building. They had been destroyed by the humid weather in Malaysia. I started re-photographing them.

Eiffel Chong (b. 1977; Kuala Lumpur) graduated with a MA in International Contemporary Art and Design Practice from the University of East London. His work considers abstract concepts of life and death through the banal details, silent landscapes and curious obsessions he observes from daily life.

imag(in)e sea is a series of talks that features people who work with photography in Southeast Asia. It takes place whenever/wherever the opportunity arises, providing a space for different photo-based practices to meet/collide. Occasionally, it aims to highlight the work of notable individuals beyond the region. Its current partners are Select Books and Invisible Photographer Asia.

imag(in)e sea is initiated and moderated by Zhuang Wubin. 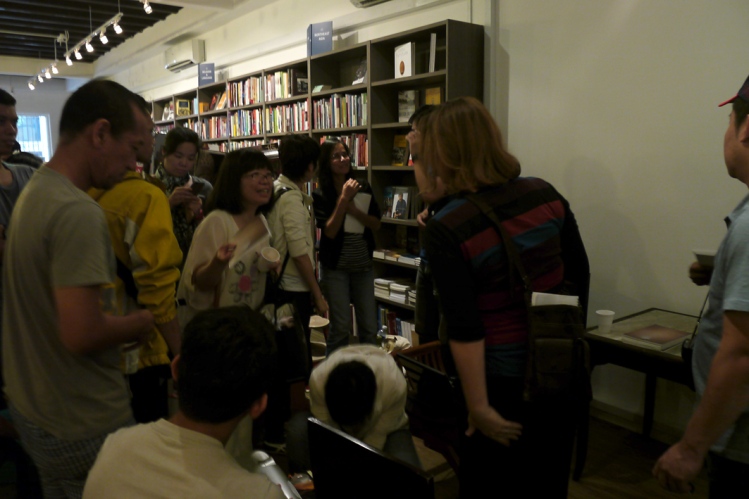