I have been invited by Esplanade (Singapore) to present my ongoing photography project, 小城故事 | Chinese in the Small Towns and Rural Areas of Southeast Asia (2010-     ), at the Tunnel from 10 Jan to 24 Feb 2013.

This is the introduction to the exhibition:

The histories of the rural Chinese communities in Southeast Asia have yet to be written. And this may affect the legitimacy of their presence, writes political scientist Mary Somers Heidhues.

This ongoing project is an attempt to visualize the stories and cultures of these Chinese communities using the medium of photography. By “small towns”, I refer to places that are no longer considered the primary cities of the region, including places in the countryside.

In the villages surrounding Kampot town, South Cambodia, Teochiu farmers harvest durians and sell them to Phnom Penh, using part of their earnings to fund Sok Eng School (树英公校), so that the younger generation can continue to study Mandarin in the countryside. On the other hand, the Mekong Delta in South Vietnam feels like a fluid zone where the Chinese continue to arrive and leave, much like their predecessors who arrived there in the second half of the 17th century. Nevertheless, I remain mindful of the fact that, even in these places, change is taking place. Only a generation ago, the Cina Benteng (Chinese of the Fort) of Tangerang, West Java, lived off the rice fields that they owned. Today, as these areas get developed for commercial and residential purposes by Chinese developers from Jakarta, the Cina Benteng will soon be displaced, making it impossible for them to retain their traditions.

In this selection, I have included photographs from Tangerang, Kampot and the Mekong Delta.

Introduction to the section on Tangerang, West Java:

In 1685, the Dutch built a fort (benteng) at the current town centre of Tangerang (丹格朗). Eventually, the Chinese who lived around the now-demolished fort started identifying themselves as Cina Benteng (Chinese of the Fort), says David Kwa, an observer of Chinese culture in Indonesia. Nowadays, the Chinese who live in the countryside of Tangerang Regency also label themselves as such. But the term also has a derogatory connotation, often used by the urbanized Chinese to stereotype those who are poor, dark-skinned or kasar (rough). Ironically, the Cina Benteng have also been seen by some urban Chinese as the bearers of Peranakan (local-born Chinese) “traditions”, which is why their countryside weddings can sometimes turn into an exotic spectacle. But the Gambang Kromong music, which originated from the Cina Benteng communities, suggests that acculturation has also taken place over the centuries. Its older repertoire features the fusion of Chinese, Sundanese and Betawi elements.

The rice fields that once sustained their culture are now being turned into commercial and residential areas by Indonesian Chinese developers. At the same time, the younger Cina Benteng have become less interested to toil the fields, preferring the comfort of office work. It is inevitable that the Cina Benteng culture will be affected. 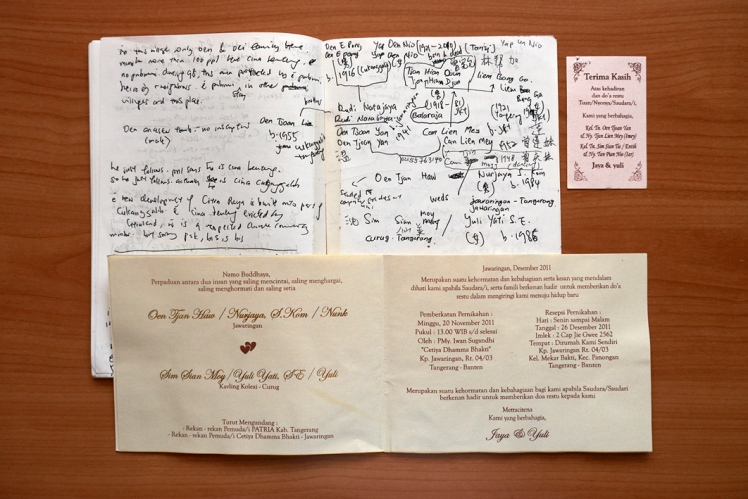 Notes from my visits to Tangerang, West Java, on December 2011. With the invite to the Cina Benteng (literally “Chinese of the Fort”) wedding of Oen Tjan Haw (b. 1984) and his wife Sim Sian Moy (沈仙美) at Jawaringan 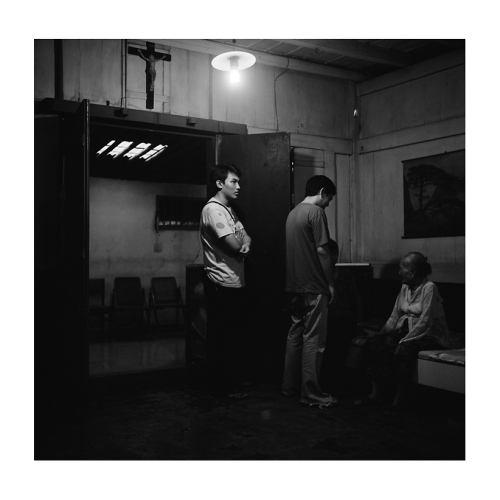 The vernacular dwelling of the Cina Benteng is typically known as Rumah Kebaya (literally “House of Javanese blouse”). However, the origin of the name “Rumah Kebaya” is still a matter of conjecture. Built in 1933 and located at Teluknaga, this Rumah Kebaya is owned by Ong Erni (right; b. 1928). Some members of her family, including Ong and her late husband, have converted to Catholicism.

Introduction to the section on Kampot, South Cambodia:

Nestling by the river, Kampot is a breezy town with colonial-era Chinese houses—some renovated, others in disrepair—near the old market. According to historian Penny Edwards, the Teochiu community was already visible by the early 1900s. If you take the Tek Chhouu Road (响水路) out to the falls, the villages along the way—Snam Pram Pir (内巴), Ma Leng (马龙) and, across the river, Kamjay (甘再)—are also populated predominantly by Teochiu farmers. The famous Kampot pepper was once cultivated in the area some 100 years back, says Chea Theng Khiv (谢腾虬; b. 1931 / Ma Leng). By the time of independence, the Chinese villagers were already planting durians, which they still do today.

Calling on the villagers, I am struck by the sense of resilience that they have shown after years of turmoil—re-establishing self-help associations and reopening Sok Eng Public School (树英公校) at Ma Leng in 1992. In the 1930s, Chea’s father had a hand in founding the private school that would become Sok Eng. There was another Huaqiao Public School (公立华侨学校) at Kamjay. Like Sok Eng, it was closed down in 1970, but never to be reopened. 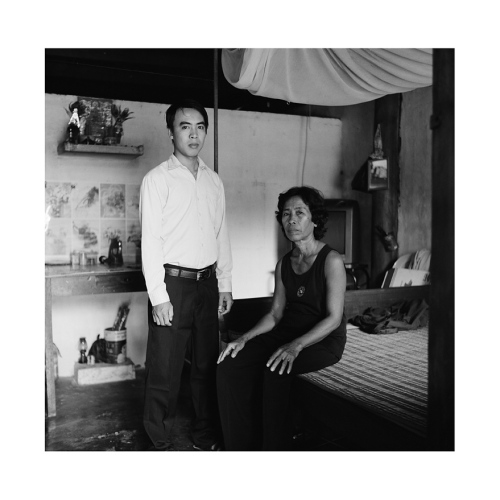 Lav Pokorng (left; b. 1989 / Snam Pram Pir) lives with his Teochiu mother Gech Chhiv (right; b. 1951 / Kamjay) and his Teochiu father at Snam Pram Pir (内巴), some ten kilometres from Kampot town. His parents grow durians in front of their house while Lav teaches computer and English at the local schools in town. 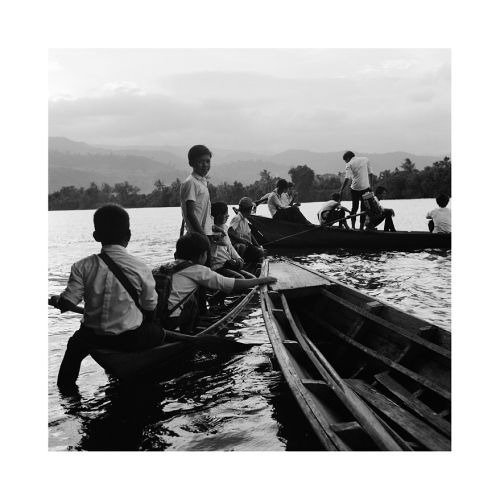 Introduction to the section on Mekong Delta, Vietnam:

As I stood, one late afternoon, on the rooftop of Hai Yen Hotel at Ha Tien (何仙), experiencing the howling winds, I wondered how the sojourners once envisioned this harbour-town. Part of the Water Frontier that was largely uninhabited some three centuries back, Ha Tien became a state with its own hinterland by the late 1750s, prompted by the arrival of Cantonese adventurer Mac Cuu (鄚玖; d. 1735) at the end of the 17th century. By the 18th century, the Chinese across the Water Frontier were fully embroiled in the wars against the Khmers, Vietnamese and Thais for territorial supremacy. But long after sovereignty had been established within the region, the border between Cambodia and the Mekong Delta remained porous. During the 1970s, for instance, Cambodian Chinese fled the successive regimes of Lon Nol and the Khmer Rouge for the villages southeast of Ha Tien.

The years following reunification brought untold hardships to the people in Vietnam. In 1979, Huynh Anh Tuan (黄英俊; b. 1962 / Tra Vinh) joined the countless “boat people” and fled Tra Vinh (茶荣), leaving behind his parents. Huynh ended up in Holland where he met a Vietnamese refugee who would become his future wife. Nowadays, he visits Tra Vinh annually. When I met him, he remarked that his son Kevin was nine, the same age as Huynh’s father when he moved from China to Tra Vinh in 1929. 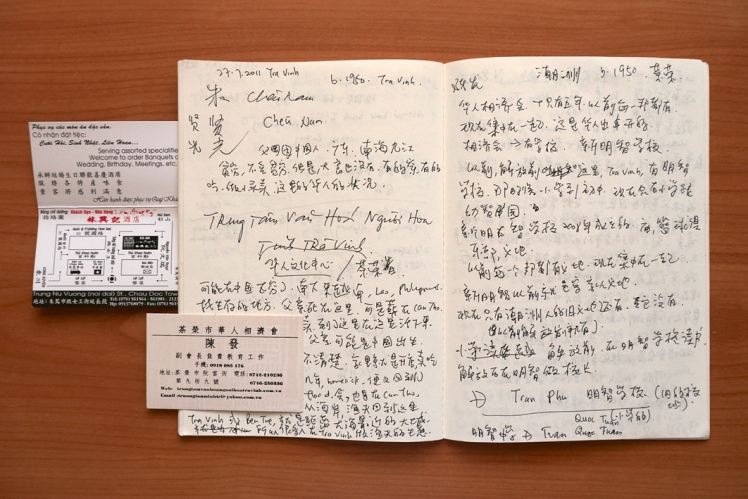 Notes from my visits to the Mekong Delta, Vietnam, on July 2011 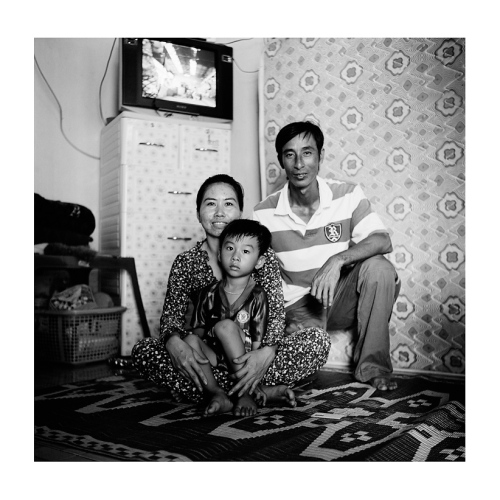 Tran Quoc Cuong (right; b. 1975 / Ha Tien) teaches English in a government primary school at Ha Tien. In his spare time, he works as a freelance tour guide. His father Trinh Ngoc The (b. 1956 / Guangzhou) came to Ha Tien in 1973 and worked as a cook in a small eatery. He took a Vietnamese wife who gave birth to Tran. When Trinh moved back to China in 1979, she was reluctant to follow. Today, he has a small restaurant in Guangzhou and keeps in touch with Tran’s mother regularly. Apparently, he did not take another wife after moving back. Tran is seen here with his Vietnamese wife Tran Thi Phuong (b. 1983 / Ha Tien) and their son in the small room where they live across the river from the old town.

View this document on Scribd

Photographs of the exhibition at Esplanade Tunnel (Singapore): 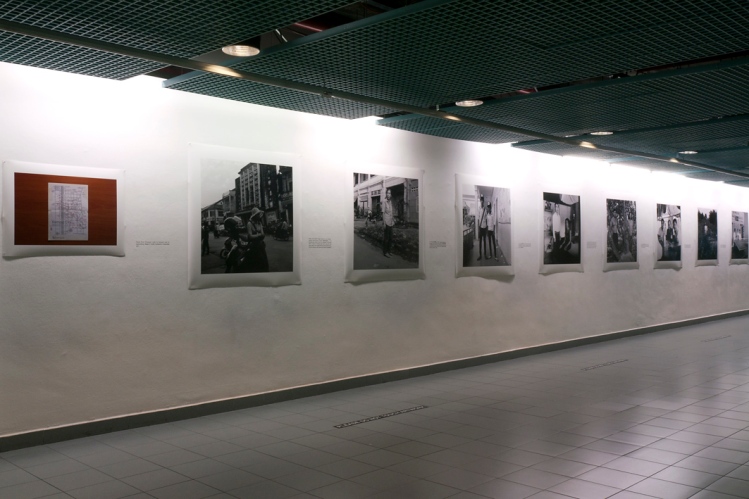 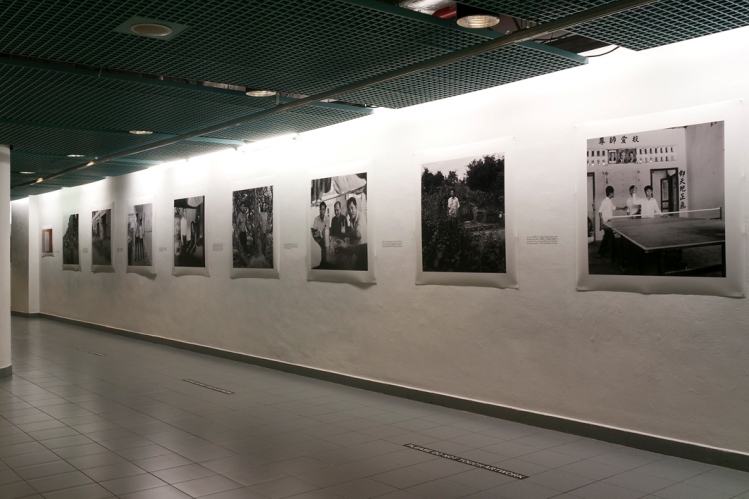 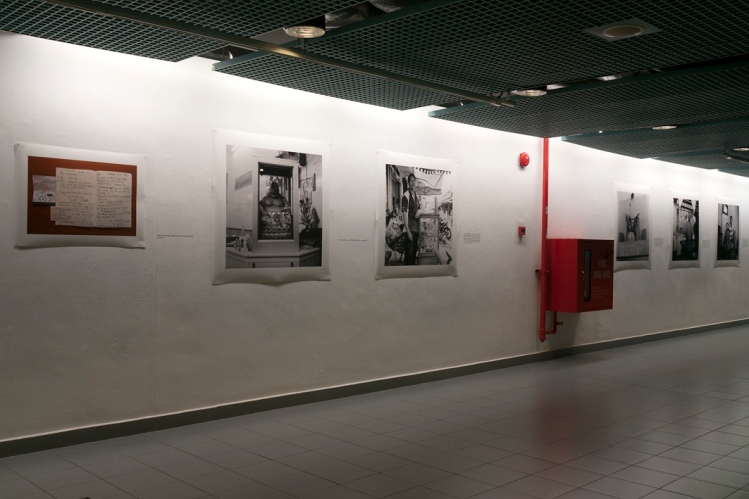 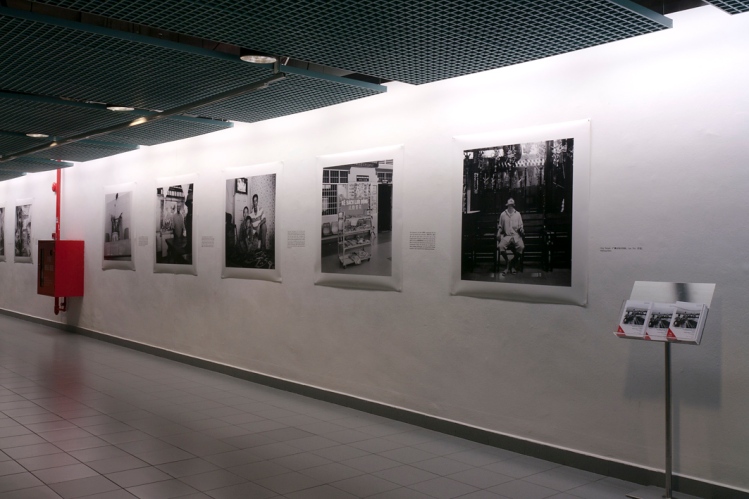