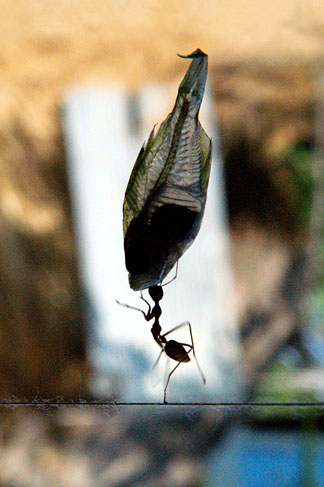 Together with Heng Sinith, Mak Remissa is one of the first photojournalists to start working in Cambodia after the fall of Khmer Rouge. Apart from his work for the press, Remissa also shot a more metaphorical work in 2005 titled “When the Water rises, the Fish eats the Ant; When the Water recedes, the Ant eats the Fish”.

This personal project is reflective of the current situation in Cambodia. The title of the project is an ancient Khmer proverb that is still widely used today. Ants and fishes dominate each other depending on the physical environment they are in but neither species will emerge as the winner in the long run and the equilibrium of nature will be maintained.

Using this as a starting point, Remissa returned to the suburbs of Phnom Penh where he grew up as a child to observe the activities of ants and fishes – the main protagonists of the project. He was searching for a way to document their activities so that the images would serve as metaphors of the Cambodian society. Fascinated by the similarities of their way-of-life and that of human beings, the photographer conceived a series of images and made sketches of them. Shooting under natural light, his aim is to attract viewers’ attention with strong colours, unusual compositions and the fascination of seeing something so small up-close.

“Today, we struggle to maintain our status at work and at home,” says Remissa. “We strive to rise in power at every opportunity but it is always done at the expense of others. Status and power are the ultimate goals.”

Having survived the Khmer Rouge and living today in a society where changes of power can still be swift and dangerous, Remissa hopes that his viewers will treat people with respect.

[A red ant carries a dried fish on a string at Preakompeus village, Kandal province. / From “When the Water rises, the Fish eats the Ant; When the Water recedes, the Ant eats the Fish” / Courtesy of Mak Remissa]