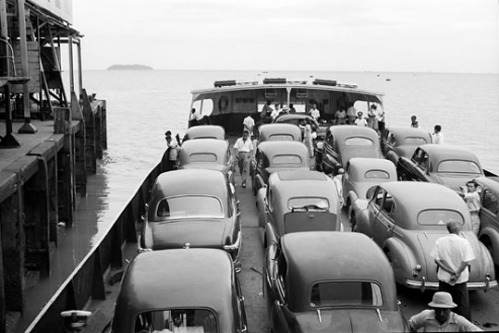 Because of his privileged position, Ismail Nasiruddin Shah – the late Sultan of Terengganu and former Yang di Pertuan Agong – could afford to photograph Malaysia and Singapore when most of the residents were trying to eke a living. He worked like a street photographer, perhaps without thinking that his images would take on an archival quality in future.

Today, the legacy of Sultan Ismail, who was the first Malay photographer to be accredited an Associate of the Royal Photographic Society of the UK, is under the custody of his grandson, Raja Ihsan Shah. The latter explains: “My grandfather was more like a social photographer – he understood the places and people that he pictured.”

There are various phases to Sultan Ismail’s photographic life. From 1948 to 1953, he shot a fair number of portraits on children and workers, hand printing or hand-colouring his images back in his studio. Sometimes, he would colour the negatives to accentuate the blacks or the facial details. From 1957, the sultan started experimenting with colour. His first interview appeared on the Malay paper in 1958. By mid-1960s, all his colour pictures were shot on Leica cameras. Most of his printed images were not cropped unless there were a lot of people in the frame. According to his wife, Sultan Ismail’s favourite hours were 7 to 9am, 12 noon and 4 to 6.30pm.