From 9 to 19 September 2009, I was invited by the French Language Center of Vientiane to run a contemporary photography workshop at the National Institute of Fine Arts, Laos. There were 12 participants, made up of faculty members and students from the university. For some, it was their first contact with contemporary art.

Angki Purbandono, founding member of the only contemporary photo collective in Indonesia, was at that time in Fukuoka as a participant of its prestigious residency. He was genuinely excited by my involvement in such a meaningful project. But when I told him that I was not interested to teach them a certain kind of photography, be it documentary, contemporary, or pictorial, Purbandono expressed his disappointment via email.

Art education in Laos is still largely craft-based. Why not be brave and start everything properly for the participants by putting everything down in the right way, he asked.

Clearly, Purbandono wanted the best for my participants. However, perhaps even without him realizing the case, he was adopting the same starting point of many foreign photographers who arrived in the early 1990s in Cambodia to “help” kick-start the photographic scene but ended up telling the Khmer artists what was right and what was wrong.

As an outsider, what do I know about the situation in Laos? Even if I can “teach” them contemporary photography, what can they do with it? Halfway through my workshop, I ran a crash course in Photoshop for some of the participants. When I saw some of them searching for the alphabets on the keyboard, my doubts grew stronger. What can I teach that is of use to them?

As a traditional Lao painter, it is possible to put rice on the table, perhaps build a house that does not leak, and even buy a car. Speaking without context, Purbandono has assumed that the valuable experience that he has accumulated in Yogya would be automatically applicable to the situation in Vientiane, completely ignoring the differences in terms of politics, culture and societal conditions between the two countries.

The other question to ask is: If we constantly transplant what we know about photography, which is naturally western-centric at this juncture, to the Majority World, will we ever develop an Asian perspective to photography? I ended the workshop with these doubts in mind.

My methodology is fairly simple. I start off by showing the works of Southeast Asian photographers whom I have researched over the last three years. This is to illustrate the fact that the raw ideas of contemporary photo projects can often be found in our immediate environment. Unsurprisingly, it was easier for the Lao participants to at least understand the projects made by photographers in the region than those shot by western artists.

After that, I require each of the participants to develop a project. What I do essentially is to make tweaks to their ideas and challenge them constantly during the process of shooting. As much as possible, I refrain from telling them what to do, until the very end of the process. This is the second time I have conducted a workshop using this methodology. The first was in Surabaya, via an invitation by the CCCL, towards the end of 2008.

I always believe that photography, when applied in a certain manner, can help the artist discover her or his world. This is my primary starting point. Here are some of the more interesting projects from the Lao workshop. I was responsible for making the edit and doing some minor Photoshop work (contrast and sharpening only).

I will like to use this opportunity to thank the following: Olivier Planchon, for giving me the chance to do this meaningful work, Xay Xaykhame and Souliya Phoumivong, for helping with the translation, Philippe Coste, for giving me a lot of background to the photographic scene in Vientiane, and Elaine, for making everything worthwhile.

Painting student Chandaline Thipmany focused on a lady who makes and sells religious offerings outside a temple. The photographer thought initially that the seller must be from a poor family. When she visited them, Thipmany realized her impression was inaccurate. The seller also works as a nurse in a medical clinic. With the help of photography, Thipmany has learnt about the life of the stranger whom she always passes at the temple. One of the more motivated workshop participants, she hopes to be a journalist in future.

Painting student Thamma Phantholak created a series of photographs centred on his struggle to be an artist. With a portrait of Picasso as the starting point, Phantholak asked his friend to take portraits of him in class. My suggestion was to take the work beyond the confines of the classroom. I pushed him to be less uptight in the images. By working on the project, Phantholak eventually let his guard down and started playing with the camera. Personally, I am interested in the visual and sociological connections of an artist-wannabe against the physical landscape of Laos. 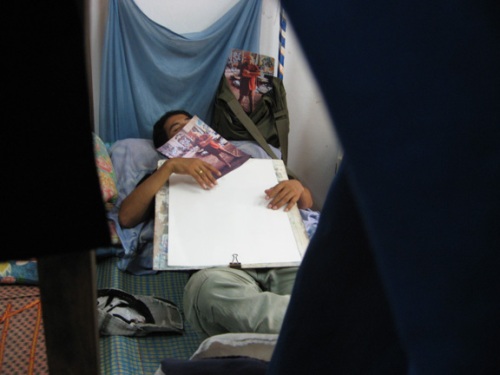 Painting student Souphapheun Souvannabandith wanted to shoot a project about the possessions of his family. As a member of the family, it is assumed that such a project is of no challenge to Souvannabandith. Many of his initial images were about ordinary household items and they lacked any sense of intimacy. I encouraged him to ask his family members to point out the important items in the household. That was when he gravitated towards the photos found within the house. I included some of his shots of household items in the edit to make the work more open-ended. It is an intriguing work because there are several ways to approach the images.

Painting lecturer Souliya Phoumivong did a work that articulated the sense of dislocation that he felt in this age of globalization. Despite the proliferation of communicative technology, how much is Laos connected and relevant to the world? Along Heng Boun Road, young Laotians are seen mimicking the fashion and lifestyle beamed in via Thai cable TV. Phoumivong’s work questions the sustainability of Lao culture as the country opens herself further to the global community. 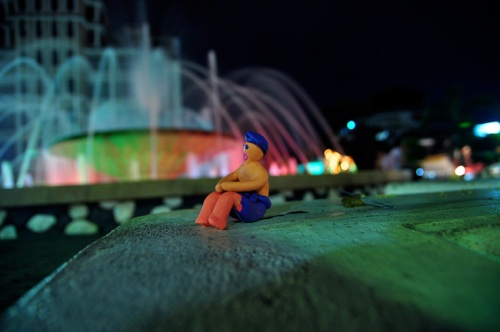 As a painting student at the National Institute of Fine Arts, Alunsine Khamani spends his time away from school in the dormitory. His friends in the dorm come from different parts of Laos. For a few years, they become temporary members of a “family”. Using photography, Khamani hoped to document the lives of his newfound “family members” in the hostel.

Printmaking student Sone Khounphaseht woke up at 3am for several days to document the life of a snack peddler in Vientiane. Her first set of images was unfocused but the energetic female photographer remained unperturbed. She hoped to create a portrayal of an everyday man struggling to make an honest living in Laos.

Painting student Vankham Nourphanithns did a work on the drinking culture in Vientiane. Unsurprisingly, the project started out with the female photographer eager to express her perspective on the issue. I moderated that tendency by asking her to focus, first and foremost, on capturing the atmosphere of her friends having a drink. The images are striking, partly due to the usage of flash. 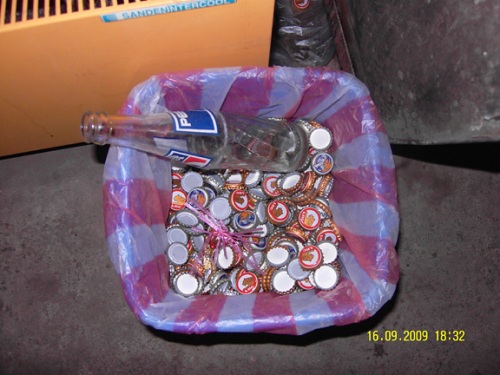